The Link Between Invitees and Attendees Print

It’s important to understand the relationship between invitees and attendees and how the conversion from invitee to attendee works.

An invitee who clicks on the CTA button in an invitation email to register is converted to an attendee and is thus considered a Converted Attendee (or converted invitee, depending on the perspective from which you view it).

In the backend, Jen's invitee profile will be identified as a converted attendee by a green Attendee tag next to her name on her Invitee Sheet:

Note that Jen's name will also be under the list of inked attendee(s) (as shown also in the screenshot above), which is explained next.

If the invitee forwards the email to a friend, who then registers using their own email (i.e. an email different from that of the invitee), the friend who registered is considered a Linked Attendee. This can also be considered a registration by referral. To illustrated this:

In the backend, Bob's name and email will then be under the Linked attendee list under Jen's Invitee Sheet:

Note: In the scenario from which the above screenshot is taken, Jen herself did not register. Hence, there's no green Attendee tag next to her name.

Participants who register by accessing the event page separately and directly, without clicking on a CTA button from an invitation email, are considered External Attendees.

Note: This also applies to invitees. Meaning that if an invitee registers by accessing the event page directly (e.g. typing in the URL in their browser) instead of clicking on the CTA button in their invitation email, they will not be considered a converted attendee but an external attendee by the system. There will be no link between the invitee profile and the attendee profile, even if the email address is the same for both profiles.

To illustrate this, see the diagram below. If Jen as an invitee receives and invitation email, but yet does not click on the CTA button and accesses the event page directly and registers, then she becomes an external attendee. 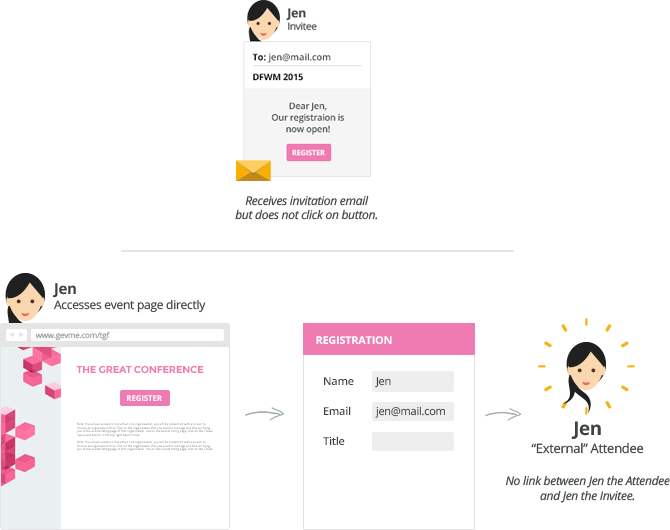 G
GEVME is the author of this solution article.